A key reason why Litecoin [LTC] holders should be wary is…

Litecoin [LTC] recorded the highest gains in the last 24 hours out of the market’s top-20 cryptos. According to CoinMarketCap, the altcoin was trading at $62.21 at press time, having appreciated by 7%. Following the uptick, Santiment noted that investors who accumulated some LTC over the last thirty days were on the brink of adding 50% gains to their asset value. This inference was because of the status revealed by the Market Value to Realized Value (MVRV) ratio.

According to the same, LTC’s thirty-day MVRV rose to 4.651%. Interestingly, the same metrics had plunged to -12.30% on 9 November, leaving investors and long-positioned traders in ruins. However, the latest upturn meant LTC seemed dogged enough to withstand the pressure the market has faced recently.

However, LTC appeared to be recording much lower accumulation, according to Glassnode data. Furthermore, Litecoin’s liveliness was as high as 0.733.

This state implied that a huge number of LTC long-term investors might be liquidating their positions. In addition, this could also mean that investors could be wary of an impending price reversal.

Despite the recorded price incline, short-term investors might need to be wary of holding on to the coin. This, because the one-day LTC circulation was nothing short of gloomy. According to Santiment, the one-day circulation had significantly fallen to 398,000. Interestingly, this fall did not suddenly begin over the last 24 hours.

Data from Santiment revealed that it has been declining since it last hit a high of 3.5 million on 14 November. Therefore, the status aligned with that of liveliness. This, because decreasing circulation meant fewer unique LTC coins were involved in transactions since the aforementioned date.

Additionally, the network realized profit and loss at 335,000 suggested that long-term investors remained in the grey.

Where does LTC go from here?

LTC might not be able to sustain its recent momentum. This, due to the signals shown by the Directional Movement Index (DMI). According to the DMI, the positive DMI (green) has been unable to uphold its position above the negative (red). While the Average Directional Index (yellow) had fallen to 17.28, there were still signs that LTC could choose a bearish direction.

It was a similar situation with the Moving Average Convergence Divergence (MACD). At press time, sellers (orange) were in control despite attempts from the buying momentum to overtake them. Hence, it is likely that LTC would decline in the short-term, especially if Bitcoin [BTC] doesn’t lead a rally. 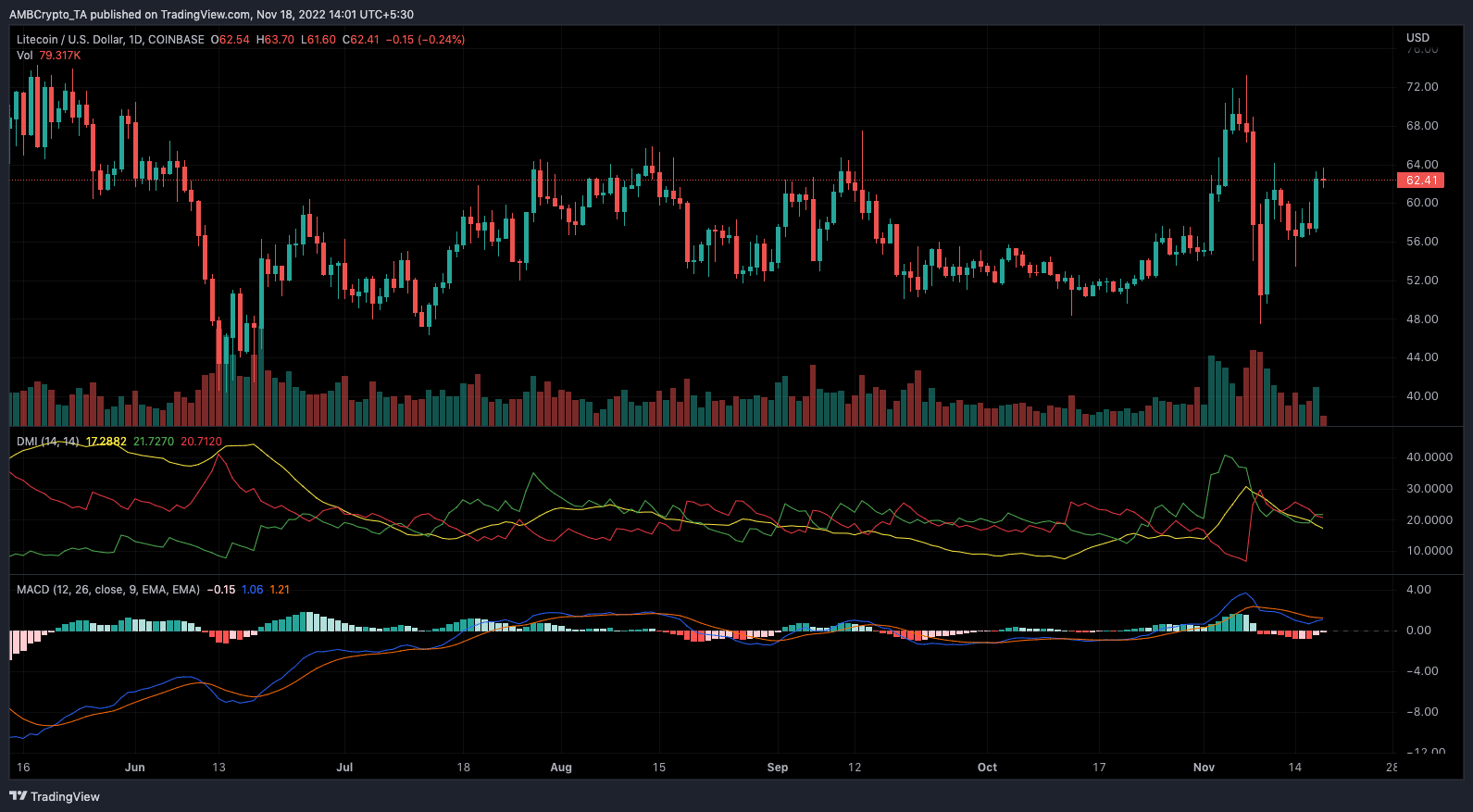 Top Analyst Details Path Ahead for XRP, Chainlink and an Altcoin That’s Exploded 124% in Just One Week