Could this latest Ethereum development impact the price of ETH? Details inside

Ethereum recently saw a dip in the transaction volume on its mainnet
Ethereum price has, however, shown no signs of impact from the latest development

In recent weeks, the price of Ethereum [ETH] has been moving, at most, sideways. Of course, given that the cryptocurrency market witnessed a dip, this wasn’t exclusive to it alone.

However, Ethereum recently experienced a minor decline in daily transactions. Furthermore, at press time, the altcoin was having trouble crossing the customary threshold of 1 million. So, with this recent development in this on-chain metric, is it normal or cause for concern?

According to data that could be seen on Etherscan, daily transactions on the Ethereum mainnet experienced a modest dip. This could be the cause of some concern. As of this writing, there were between 800 million and 900 million daily transactions, which was below the 1 million threshold.

However, further analysis of the mainnet data revealed that the dip was not recurring and witnessed recovery.

Holidays and gas fees to blame?

The holidays and the halt in trading by institutional and individual investors could be logical explanations for the fall in daily transactions. Historically, the holiday season has been a time when fewer trades are seen for both stocks and cryptocurrencies. Thus, creating an overall bearish trend.

In addition, the gas and gas fees required to conduct transactions on the Ethereum mainnet could be another reasonable explanation for the reduction. According to a graph and statistics acquired from Dune analytics, Ethereum had over 1 billion transactions overall, with gas usage of over 7 billion.

It was clear from the Ethereum chart by hilldobby on Dune that the gas price had been rising over time. A rise in the gas price meant that the gas fee would also increase. It would thus raise the cost of transactions on the mainnet.

As a result, the majority of consumers have switched to Layer 2 solutions because they offer cheaper and faster transactions than the mainnet. This could easily explain the recent dip that was observed. 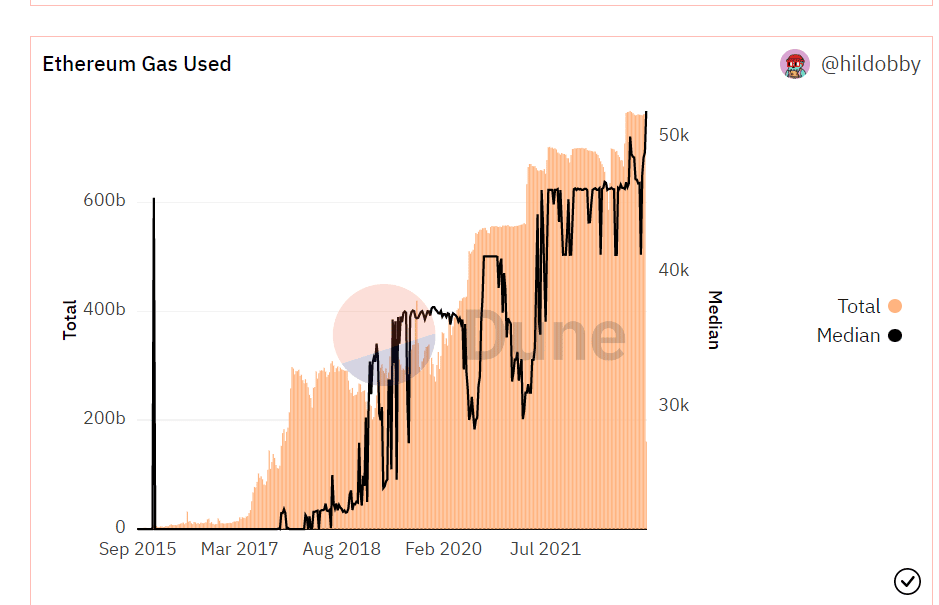 A 0.20x hike on the cards If ETH hits Bitcoins market cap?

Possible implications of a sustained decline…

Reducing the quantity of gas consumed to process transactions on the mainnet could be one potential consequence, particularly if the transaction saw failure. The transaction would become relatively less expensive as a result of the lower gas cost in the long run.

The price of ETH was also not likely to be impacted by the drop in transaction volume. It was trading in the same area of $1,200 as of the time of this writing as it had done for the previous weeks.