FTX’s $380 million trail: An exploit to uncover or a final inside job

FTX customers’ hope of getting their funds out might have finally hit a brick wall as emerging development showed that the exchange faced an exploit of $380 million. Without any clarification, FTX US general counsel, Ryan Miller, tweeted that they were investigating “abnormalities” going on in the exchange.

Investigating abnormalities with wallet movements related to consolidation of ftx balances across exchanges – unclear facts as other movements not clear. Will share more info as soon as we have it. @FTX_Official

This came after FTX filed for Chapter 11 bankruptcy on 11 November and included the initially “safe” FTX US as part of the subsidiaries affected.

With this development, the whole saga of the exchange collapse seemed to be going from bad to worse. Before Ryan put the word out, Oxfoobar, a DeFi auditor, had notified the Twitter crypto communities of strange outflows from the exchange.

Oxfoobar also noted that it was doubtful for regular users to be in control of such outflows at that time. According to him, these exits were not routine. There was also word on the street that liquidators acted on their rights. During this period, the outflows were at $26 million. Despite the confusion, comments flew around that it was a probable inside job.

Hundreds of millions of dollars are now flowing out of FTX wallets, some speculate liquidators but it’s late on a friday night, not typical times for such rapid heavy movements. Some withdrawals are being swapped from Tether to DAI. Hack or insider actions? $26 million here pic.twitter.com/8wWlaE7na9

Things continued to get ugly as Bankless released an update per the happenings. The hack had surged up to $380 million in a breaking on-chain revelation from the sovereign-finance firm. Bankless also pointed out the possibility of an inside job considering the circumstances.

Onchain data shows that $380m of funds from FTX are on the move.

Are the insiders rugging? pic.twitter.com/ZCx14QwS1A

The speculations about it being an action from an insider started to gain ground when the wallets names that receive the funds reached public domain. In a release by Autism Capital, a blockchain investigative firm, the hackers took a dig at embattled founder Sam Bankman-Fried (SBF) with their naming.

After the pillar-to-post discussion about what was happening, purportedly actual events finally came to light. This was because the FTX telegram administration sent a message hacker had compromised the platform. In the statement circulated around Twitter, the admin advised users not to visit the official website or click any links. 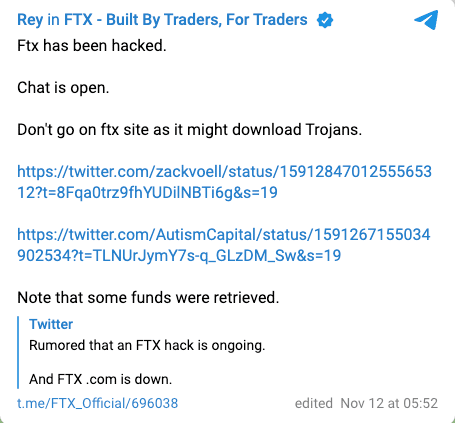 While the admin noted that the exchange had recovered some funds, there was no proof. In fact, the situation was not any better at press time. This was due to disclosure from some users that their funds now showed balances of $0.

However, the recent missing funds were not the first to be found on the exchange. Reuters reported that about $1 billion of customer funds were missing. The international news platform also disclosed that SBF denied that the exchange moved the funds secretly.

Here’s Where Bitcoin’s Price May Land After FTX Implosion, According to Rekt Capital